Home » Learning » The Lost Art of Compilation for Authors and Students

There is an essential skill which many of us have lost.

This loss is a symptom of how easy it is to publish. Or tweet. Blog. Snap. Broadcast. Record.

Our filters have dropped. We say what is on our minds and hope for a “like.” Really, our ancestors were no different. They wanted the same social approval. But the medium they had to work with was different.

Writing a letter requires an entirely different method of communication. The author must keep in mind the long round-trip-time of the letter. This delay shifted necessitated a different set of goals for the message. Limited space plus long delays meant that every word had to be well-chosen.

As one of my favorite (perhaps apocryphal) quotations has it:

I would have written a shorter letter, but I did not have enough time.

These constraints forced our ancestors to learn the skill of compilation. Today, to “compile” is a word used almost exclusively by computer programmers describing the jobs of computers. But it was once something we did by hand.

Two years ago, I decided to undertake writing a book. I knew I had a message to share, and that I wanted to make a strong case supported by research. But I, like many, had forgotten (or never learned) how to compile my ideas. It took me lots of experimentation and failure to find a process that worked. I learned to refine and cut.

This post is the guide that I wish I had had before I started. It explains how I spent the first year generating ideas, the next six months drafting ideas, and the final six months revising and polishing. It even has links for other aspiring authors out there looking for some practical suggestions.

So let’s start at the beginning, when I was just trying to figure out what it was I’d be writing about…

Nobody can just sit down and invent a new idea on-demand. The more you strive for originality, the more it eludes.

Thankfully, we can create the conditions for originality. The recipe is simple:

Collect lots of different information and smash it together.

Creativity researchers find that novelty exists at the intersection of different disciplines. I started reading a wide variety of books on psychology, the mind, neuroscience, behavioral economics, and so on. In the beginning, I only knew that the book was going to be about the psychology of making things. I wanted to understand the ethos of the people I admired the most. It was vague, but enough. Using my Kindle, I highlighted any passage that seemed relevant or just plain interesting. Then, I used Bookcision (a browser plugin) to automatically send the Kindle highlights to Evernote.

That wasn’t quite enough, though. I didn’t want to lose the context of why I thought a note might be relevant, or how it would fit into other things. I also used Wunderlist as a scratchpad of ideas, constantly organizing and re-organizing top-level concepts (lists) and sub-tasks to represent specific authors or citations that might support a point:

If you’re like me, you probably skipped outlining back in school.

The deeper I got into organizing my lists of ideas, though, the more I realized that I needed to be clear about what the book was going to say. I started going back through the Evernote notes, re-reading them one by one. Most ideas didn’t fit like I thought they would. Plus, there was just too much to keep track of.

I ended up settling on the MindNode program. I spent a couple weeks diagraming the ideas before I wrote my outline:

Actually writing the book took less than 10% of the time it took to “write the book.”

I used an excellent app called Scrivener. It’s a perfect hybrid between a writing and organizational tool, calling itself a “complete writing studio.” I started by transferring my notes and outlines (yet again) into the Scrivener platform. All of this constant re-organizing was tiresome. But each time I did so, I understood the material better. This is the essence of the skill of compilation. To reduce the material to its essence.

I wrote the entire 70,000 word first draft during a three week vacation. I knew that I needed to get into a rhythm, so during my trip to Brazil I started each day by writing 4,000 words. It was painful and exhausting. Some of it was total crap. By the time I returned from the vacation, I didn’t even want to look at the book.

It was four months before I took another vacation. This time I went on a one-week road trip around Iceland by myself. There were days when I hardly saw another person. This was the worst and the best part of the whole process. One part of me was sure that the book made absolutely no sense. Or that it was boring. Repetitive. Trite. Hackneyed.

The other part of me could feel the tantalizing edges of something unique. Every once in a while, I would let myself believe a sentence (or even a chapter) was actually decent. Not good. Not great. But maybe worth reading. Once again, by the end of the vacation, I couldn’t even look at the book. I was incapable of distancing myself. I had no idea if it was good or bad.

It was another six months before I took another vacation. This three-week trip let me sit down and give the book the time it deserved. I realized that I needed to trim away most of the language. The more complexity I removed, the more the ideas of the book began to pop out. I focused on simple, clear writing and viciously cut or painfully reworked anything that did not make prefect sense.

The earlier drafts of the book also had only loose citations. There were endnotes pointing to where I had discovered the information. But by goal had been to write a well-supported book. To flesh out these endnotes, the Kindle desktop app was extremely helpful. Simply copying from the highlights creates a well-formatted citation to paste into an endnote (see the picture to the right).

Finally, all the time spent compiling had begun to come together. I read the book from cover to cover and actually felt like maybe, just maybe, I might have something worth reading.

Nothing is quite so scary as feedback. Then again, the only thing worse than bad feedback is no feedback. 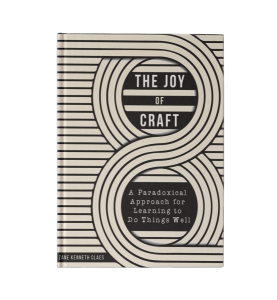 I had to find a way to get the book out there, so I launched TheJoyOfCraft.com and sent it to friends, family, and the wonderful readers of this blog. Within days, I had hundreds of readers giving me feedback and helping me smooth over the rough places. Enough of the early readers liked it enough that I’m not quite so worried as before.

I also teamed up with Archangel Ink, a self-publishing company that helps with all the nuts-and-bolts. They did copy editing, proofing, cover design, formatting for Kindle and book publishing, and generally helped with the entire process.

The book is going live about the same time as this post. Click the image to learn more.

The key tools that helped me were:

I hope you find them useful in your own compiling and writing process!