After I learned Mandarin Chinese, Spanish and a little Arabic I did not think that switching between foreign languages was very hard. The three (plus English) were all from distinctly different language families, which made the task relatively painless. Not only did they sound different but the very grammar and roots of each of the four languages were fundamentally different.

When I recently added French to the mix, things became more complicated. At first I was filling in Spanish words all the time. Finally the habit went away, but recently I traveled back across the border from France to Spain and had the opposite problem – placing French words in Spanish sentences! I decided to approach the experience as an experiment and see what I could do to improve the switching process.

After two months (total) of study and living in France, I spent a few days in Bordeaux and then took the train into the northern part of Spain. The interesting thing about this trip was that I got to step back into Spanish slowly.

There were many stops between Bordeaux and Bilbao (two trains and a bus), and French gradually gave way to Spanish as the dominant language. I offered aid to those Anglophiles who looked lost along the way, as well, so I got to practice both languages a lot.

The most interesting thing is I never had trouble understanding the natives (at least, no more than normal). It was changing my own speech that was difficult. My brain tended to fall back on whatever language I had been using most recently. After a few days and more switching back and forth, I finally figured out some tricks – and recorded my progress.

From French to Spanish

After each conversation, I jotted a quick estimation of the percentage of misused words into my journal. This may have been far from a perfectly accurate representation, but it helped me a lot to understand what was going on.

For the first 24 hours, switching slowly from French to Spanish, the graph looked something like this. It should be no surprise that after a good night of sleep my error percentage dropped drastically, from about 30% (stuttering a bit) to about 2% (one mistake every few sentences, speaking at normal conversational speed). 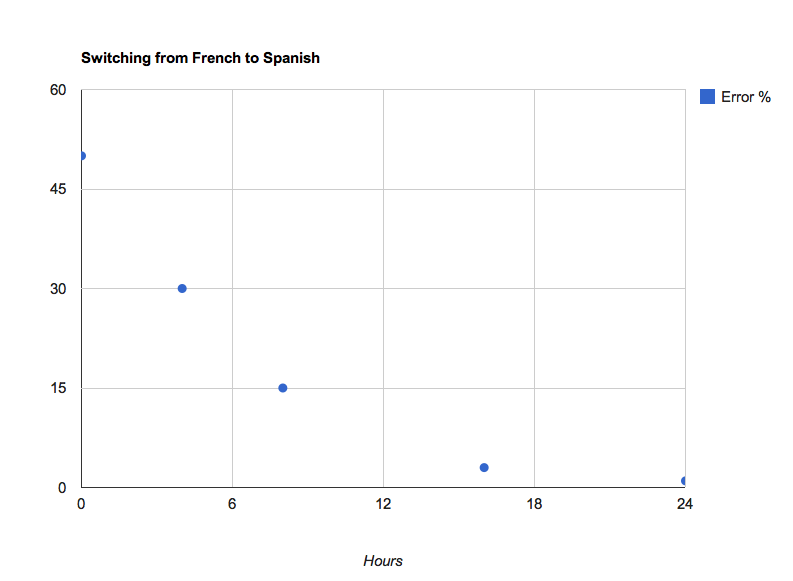 Spanish back to French

In the hotel I found myself around some French speakers and began helping them. The starting error rate was lower and the improvement faster, but there was still some discomfort. I was now switching between speaking French to French speakers and Spanish to Spanish speakers. Amazingly, this became easy quickly – I just had to learn to visualize and focus on the person in front of me.

Without a doubt, switching languages is a trainable skill.  Many polyglots (like Benny) have suggested associating gestures, accents or imagery with a language to help remember it. In essence, to create a unique personality for each in your mind that fits not only with the language but the culture as well (such as gesticulating more in Italian). This lets you slip between personalities and remember each language better.

The more I switched, the more I started doing this without even realizing it. Spanish is not only spoken differently in terms of accent, but more rapidly and with a different intonation. It may seem silly, but even the tilt of the head (slightly back, the nose up 😉 can make French “feel” easier. To make myself produce these sounds I had to “think in a certain way.” Even the grammar structures themselves require that you approach concepts in your mind differently.

For example: in Spanish, the phrase to express that you are enjoying something is as simple as using the verb to “enjoy.” On the other hand, in French, it is a bit more complicated. The verb to enjoy still exists, but to say “I am enjoying it” you would say literally “I am in the benefit of it.”

I still suffer when I try to make the switch from one to the other, but in just one weekend I got significantly better at it.