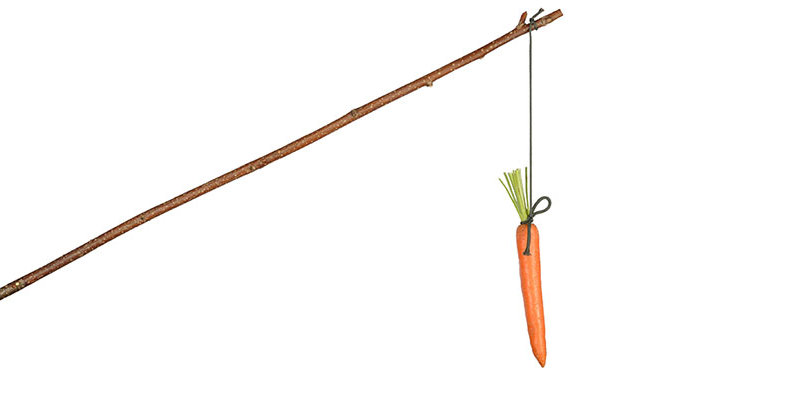 The old “carrot and stick” are two of the most-used tools for motivation. Yet, do we really understand how they work? Recent research has found some surprising truths about these age-old tools of human psychology.

Classical conditioning would have us consistently reward people for a task, yet this may not be the most effective use of rewards. A study on rats first demonstrated that randomly giving a reward for a task caused a greater release in dopamine. The optimal scenario was found to be one reward given randomly, for every two attempts. This caused the rats (and later pigeons and other animals) to keep at the task longer, becoming more “obsessed” with the task. Here’s a video with B.F. Skinner, the psychologist who first discovered the effect:

Contrary to popular belief, the neurotransmitter dopamine is released in anticipation of a reward (not as a part of the reward itself). It is this chemical which leads us to keep at a task, trying over and over again, anticipating a possible reward. In the above video, B.F. Skinner says:

People gamble because of the schedule of reinforcement…

Slot machines are the paradigmatic example of a variable reward system. This fact is exploited in video games, among other places. Even outside the realm of simple gambling, game designers know that a game completely devoid of randomness is frequently devoid of fun. Consider a card game: if the cards came out in the same order every time, then the game would quickly lose it’s appeal.

Random rewards should not be overused, of course. It is unlikely that any sane person would agree to a completely random salary at a job. The fascinating thing about random rewards is that they fly in the face of our innate perception of fairness. Perhaps it is exactly because the situation is not fair, though, that we are entranced by the possibility of “winning big” if we just keep at it.

If you want people to never learn their lesson, or worse to drive them insane, punish them randomly for their offenses.

This is exactly what the probation system in the United States does. The justice system is set up in such a way that offenders can escape punishment many times before suddenly being punished with one large jail sentence. A new program in Hawaii has changed this paradigm and experienced great success. Instead of random punishment, every single infraction is punished with small amounts of jail time, right away:


5 years after the program launched, the Department of Justice found that the participants in the HOPE program were half as likely to be arrested for new crimes or have their probation revoked (as compared to the normal probation program). They were also 72% less likely to use drugs and spent 52% less time in prison… which meant that the net effect for the taxpayer is a lower cost.

Punishment is just a feedback tool used to teach a person a new behavior. In learning any skill, it is important to have immediate and concrete feedback. Mental models explain that the speed at which a person learns a skill is directly correlated with the speed and accuracy of the feedback. This is because behavior only changes when a correction is made. Net personality/ability change comes about as a result of the quantity of corrections (this is even true in places like meditation). In other words: one big looming possible jail sentence is not as effective of a deterrent as many small corrections along the path to improvement.

Rewards are using our innate tendency towards hope, and punishment establishing boundaries to limit our belief that we can cheat the system. When the boundaries are strong and the opportunities are real, we are maximally motivated to strive for the rewards.