Home » Uncategorized » Learn Dvorak: How Long it Takes to Learn a Dvorak Layout

If a Dvorak keyboard sounds like a quasi-sci-fi tool for nerds, you’ve pretty much got the idea. In brief, a Dvorak keyboard is an alternate layout (where the keys are placed in different spots) meant to maximize efficiency. You don’t need any special hardware to switch, and any computer can be configured to use the Dvorak layout.

I was curious about the supposed benefits of a Dvorak keyboard, so I decided to switch… and I religiously kept a typing-speed-test journal for the first year, to show exactly how long it took me to learn (and if the benefits are really all that great).

The Supposed Benefits of Dvorak

First, a quick history lessen: the “normal” keyboard we all know and love is called a QWERTY keyboard, because the top letters from left to right read QWERTY. It was designed way back in the typewriter days, because it helped to prevent typewriters from jamming. Unfortunately, this means that the QWERTY layout is not optimized for typing comfort or speed.

This is where the Dvorak layout comes in. It was scientifically designed to equally spread effort between the two hands, reducing “tracking” so that the fingers move as little as possible. Among the supposed benefits are faster typing, less stress on the hands (pain), better accuracy, etc. In fact, the fastest typist in the world uses a Dvorak keyboard to maintain 150 WPM (words per minute) for nearly an hour on end. The peak speeds on Dvorak and QWERTY are clocked at 226 WPM and 192 WPM, respectively.

Some people claim that the Dvorak keyboard takes only 1 month to learn (to reach the same proficiency as QWERTY). I decided that I wanted to put all these claims to the test, and took the plunge to set myself up with a Dvorak keyboard.

How to Set Up the Keyboard

Mac (OSX) users can simply open the “Language & Text” section of the Preferences pane. From there, the Input Sources tab allows you to choose from a few types of Dvorak keyboards. I chose “Dvorak – QWERTY ⌘” for the reason that it preserves the “normal” hotkeys. In other words, ⌘+C still does a “copy” hotkey, exactly like a QWERTY keyboard (you don’t have to find the C character on the Dvorak layout). 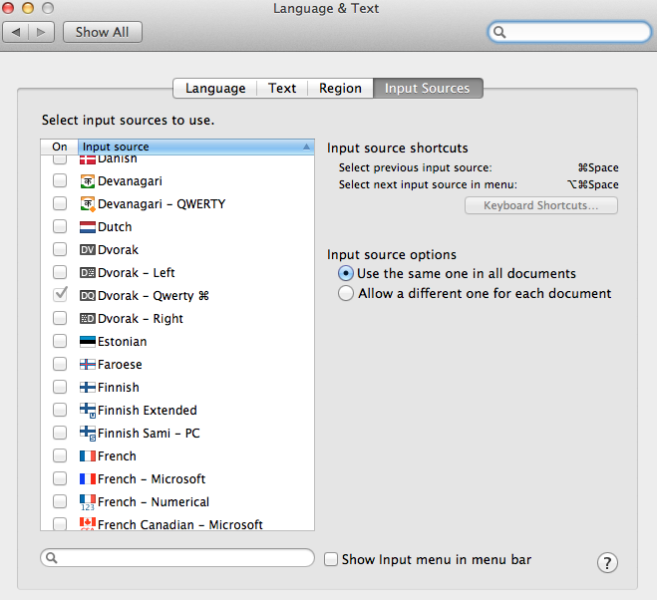 Here are some good guides for Windows and Linux users (and Ubuntu). There’s also a good application for installing the Dvorak + QWERTY ⌘ in Windows / Linux. Of course, the down side of this is that your physical keyboard doesn’t change. This means you’ll probably need a cheat sheet for the first few weeks, until you get used to the layout.

Before beginning my use of a Dvorak keyboard, I had an average typing speed of 100 WPM (words per minute) on a standard QWERTY keyboard. My baseline goal, then, was to at least reach this level of proficiency with Dvorak. I frequently used an online typing test, and recorded the results for a full year before I finally reached my 100 WPM goal:

Is It Worth It?

It depends on how you look at it. Obviously, I found the claim that “QWERTY typists can switch to Dvorak and regain their old speed in about a month” to be wildly overblown. I worked for a full year to achieve this feat, and though I had years of QWERTY experience behind me, I was only 23 years old when I started — with plenty of room for neuroplasticity.

A year after the fact, I was finally up to speed (100 WPM). All should be good, right? Well… not so fast. There are some infrequent headaches for Dvorak users. First, Dvorak – QWERTY ⌘ hotkeys don’t always work quite as well as I’d like (sometimes I find myself guessing at hotkeys in the terminal; sometimes the QWERTY key is used and sometimes Dvorak). Next, the iPhone/iPad does not support Dvorak, so when texting/etc. I was forced to use QWERTY (I wonder if this hurt my progress?) Finally, there’s the hassle of using other people’s computers: my QWERTY speed has dropped significantly, leaving me hunting and pecking when using a friend’s laptop.

On the other hand, I do believe that the Dvorak layout means that my hands are moving less, creating less stress. It also feels like this should hypothetically mean, eventually, I will become faster than I was with QWERTY (I plan to re-examine this at a later point). There’s also a certain cool/nerdy factor. As one friend humorously pointed out: even if someone knew my computer’s password, they would not be able to access it.

The verdict? Switching to Dvorak was a fun experiment and I plan to keep using it, but I wouldn’t recommend it for the average computer user. It takes a lot of effort to learn, and unless you really care about a few extra WPM and a little less stress on your hands, you probably won’t get much out of it.