Home » Learning » How I Learned to Draw: a Review of “Drawing of the Right Side of the Brain” 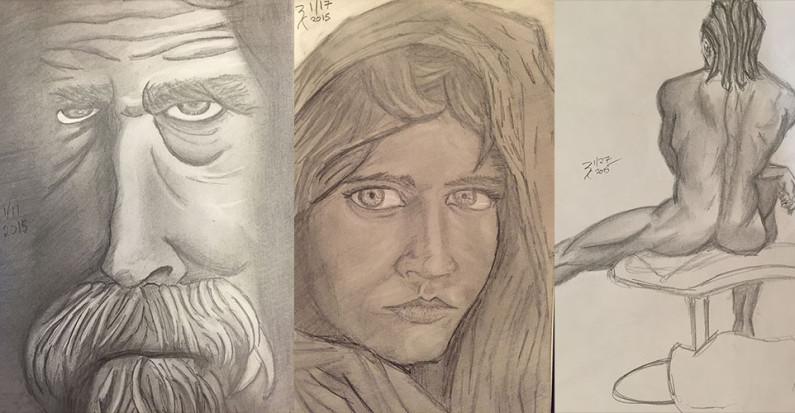 Drawing is one of “those artsy talents” — the kind that people seem to think that they either have or don’t. Yet artists will tell you that it’s just a matter of practice to learn to draw. Could a single book be enough to teach me to draw during the holidays? I decided to find out.

I picked up Drawing on the Right Side of the Brain on a whim before my trip to Brazil at the end of 2014. I knew I would have about two weeks without any real connection to the outside world. Some friends had spoken highly of it and the Amazon reviews were good, so I brought it as my non-digital entertainment option (most of my books had not escaped the digitization of all things nostalgic, and I was still unsure at this time if I would even have electricity where I was going in Brazil). I had the vague notion that I would improve my sketching abilities.

The latest edition of Drawing on the Right Side of the Brain was quick to distance itself from the right/left brain debate, despite the reference the once-popular idea in the title of the book. The author attempted to connect his ideas to neuroscience, which provided an interesting twist for the book (especially given that I have a background in neuroscience). Frankly, though, I found some of the explanations in the book a bit tiresome.

Once upon a time I loved drawing, blah blah. I don’t know why I stopped. Life, I guess. One of the few things I’ve actually kept over the years has been my sketchbooks, though.

I find the idea of capturing the emotions on someone’s face to be fascinating. You get to know them in a very different way than you know most people. To draw someone you have to see the little imperfections that make them who they are. It’s humbling and beautiful and intimate.

The Book is for Beginners…

…and really, I was/am one. Yet at the same time, a sense of pride made me race through the book as if I knew what I was doing. In the end, what I got most out of the book was the exercises. There is a collection of them ranging from the simple to the complex. I’ll be performing some of the exercises again in the months and years to come, simply because they force you to think differently — and that’s the unique point of the book.

Basically the author makes seemingly weird requests of you, like drawing upside-down or using only an eraser, in order to force you to perceive the visual world in a different way. I’ll post each of my sketches below and explain why the exercise was significant to me…

One of the early exercises is called a “pure contour drawing,” which involves drawing an object without looking at the paper and without lifting the pencil. Man, it’s weird and hard and humbling, but in completing the exercise the author shows you how he’s going to transform the way you see the world. Doing this sketch forced me to think just about the edges of an object and how they fit together, and gave me the eerie sensation of my hand “channeling” what my eyes saw: 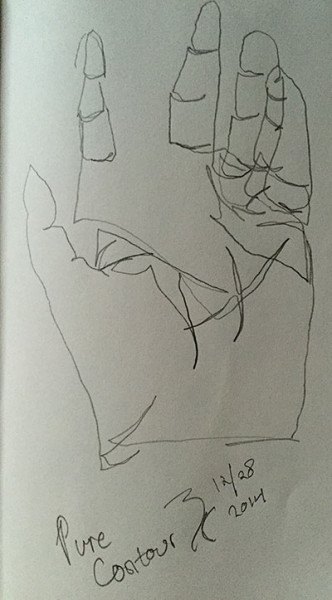 Next up, drawing upside-down was a revelation in how the brain distorts images. My first attempt didn’t go so well, but the author correctly guessed that I would enlarge and distort highly detailed areas (like the hands): 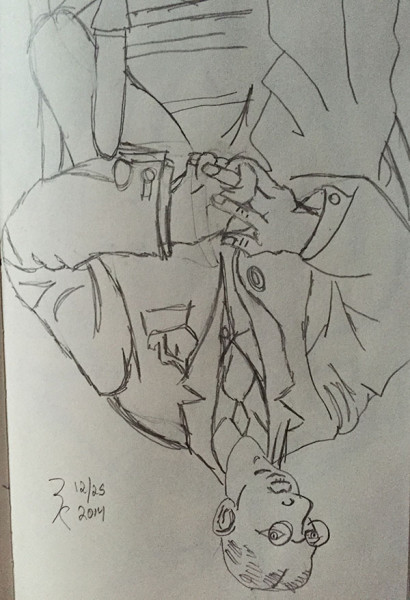 My second was a bit better. I learned to measure distances between anchor points in my drawings and build up line art from a sort of “skeleton.” Again, I felt that the improvement came from the exercise itself as well as the author’s almost prescient ability to predict the errors I would make. 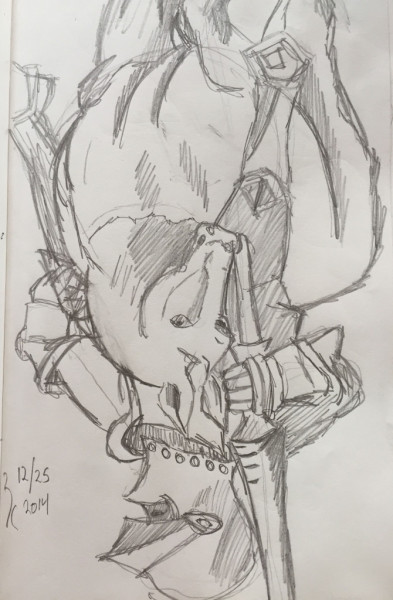 Drawing a hand was my first experience toning the paper beforehand, a technique which would change how I drew forever. Something about having a mid-tone paper makes everything more organic and alive. 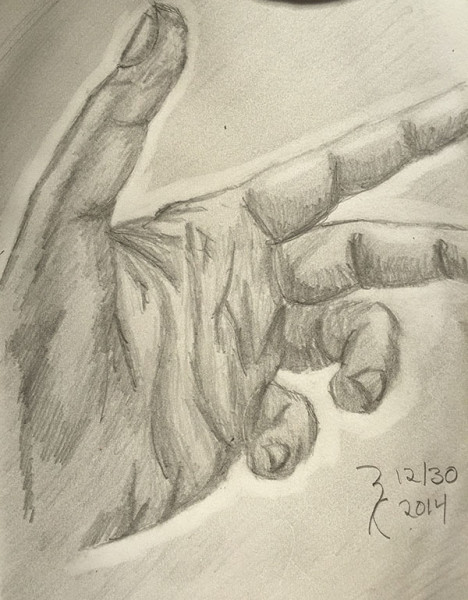 I always knew that paper could be left white, but only once I applied negative space to toned paper did I understand the effects; the chair really pops out of this drawing in an interesting way: 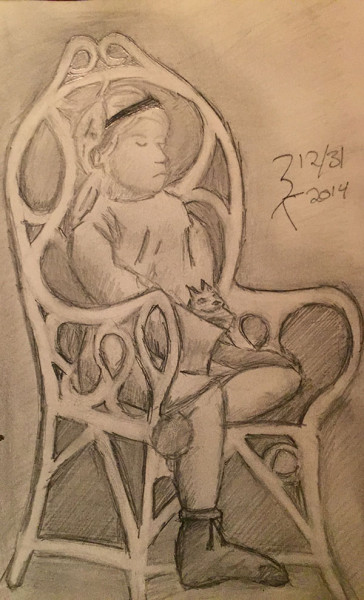 Because I was working by candlelight with only a standard mechanical pencil and a small sketchbook, I had to eyeball the straight lines when it came time to draw a city scene. Still, many of the techniques transferred well. I had to experiment with adding new textures to the drawing, in order to recreate the feeling of stone pavers, glass, etc. (this image was drawn from a reference picture I took in Poland): 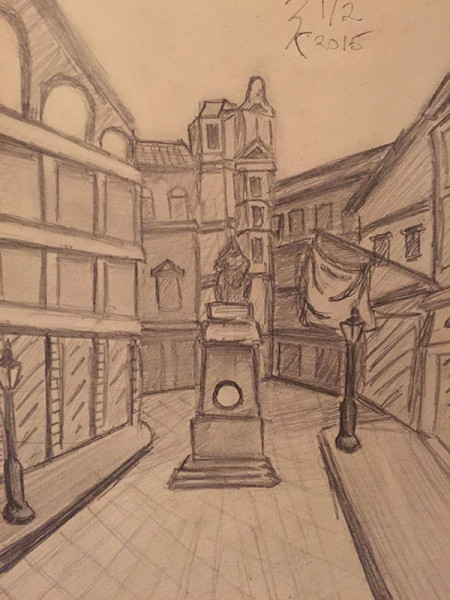 The next piece started with a fully-darkened sheet of paper and then used only an eraser as the drawing tool. This moment was another revelation for me. The eraser was transformed from a corrective instrument to a useful tool which could bring a drawing to life. I played with types of strokes with the eraser just as I did with a pencil, learning to use quick tapered strokes, how to dab the paper to lift out splotches, etc. 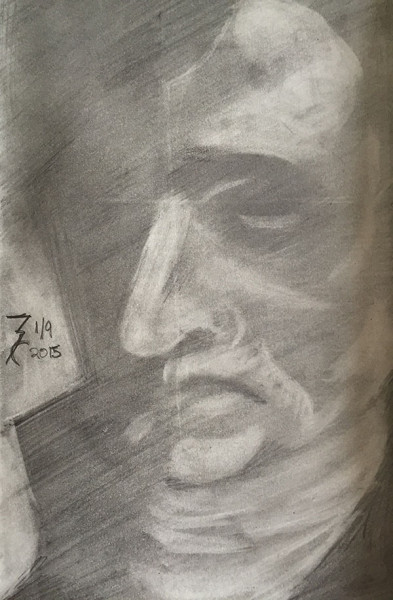 I drew a few more pictures messing around with these and other techniques from the book. For the last exercise, the author suggested a self-portrait… but I find other peoples’ faces far more interesting, so I pulled a random photo off the internet: 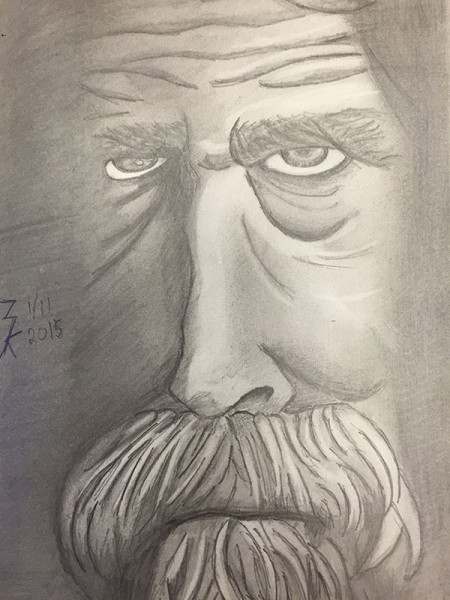 And I also did one on the plane back to the U.S. of the famous national geographic cover. 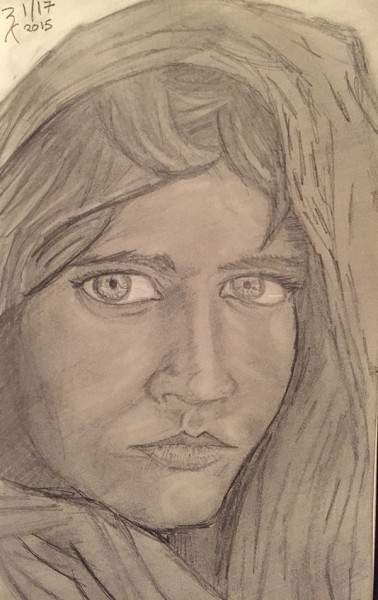 Artists have all kinds of tools, both literally and metaphorically, which I am missing. I have barely explored the range of pencil thicknesses and hardnesses at all. Even since returning home, I’m still using only a couple pencils and a somewhat larger sheet of paper. I wish I knew how to crosshatch better, and I generally need to learn how to create a lot more textures. Portraits are fascinating to me, but my skill in other types of drawing is much weaker. There’s still frequently “something off” in my drawings: 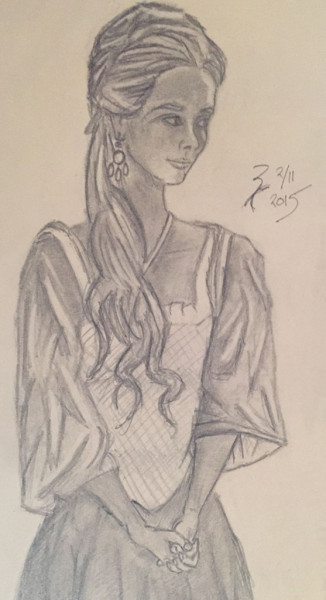 I went to a life drawing class (yeah, one where people are nude, which was weird for about 0.2 seconds). You have to draw really fast, at first. The models only hold the poses for a minute or so. Slowly, the duration increases. It is mental weightlifting for drawing. I’ve been told there’s no better way to get good at drawing people quickly. I came out of there in just a couple hours far more capable of getting an accurate first-draft onto paper, after which the rest of the successful execution just depends on attention to detail. 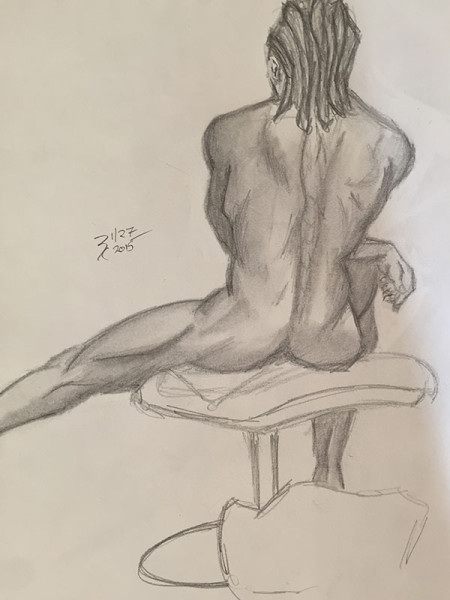 I’ll continue to improve my drawing, if only as a way to relax and change the way I use my brain. The left brain/right brain duality might be a false dichotomy, but as someone who works in computer science I can definitively say that turning off the logical and computational side of my brain to engage the visual and aesthetic is a wonderful way to alter my perception.

Since I finished the book, I’ve found myself looking at reality differently. When in a conversation with a friend I’ll notice the highlights on his face, or the shadows cast by a street lamp. If nothing else, this makes me slow down and appreciate the beauty of the world in a new way.

I’d highly recommend Drawing on the Right Side of the Brain to anybody who wants to improve their ability to draw quickly. It’ll probably take you a couple weeks to get through if you dedicate 1-2 hours per day to it. It’s a great way to change up a mindless activity like watching television for an active and engaged activity which still doesn’t require a lot of energy to do (I found that it was easy to pick up a pencil at the end of the day).

Have you taught yourself to draw, or any other artistic skill? Have you read this book? What’d you think? Please share your experiences!