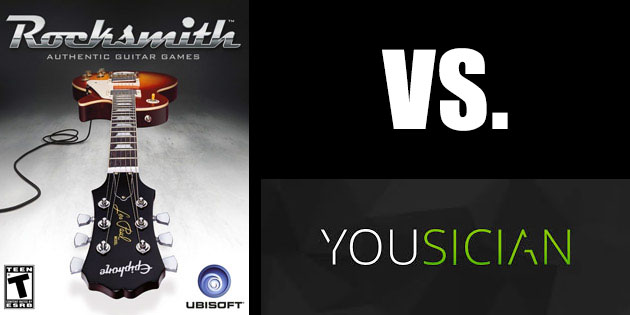 Learning the guitar is hard. Or so you may have been told.

Nobody likes endless drills. Most guitar classes might as well be boot camp for your fingers. Imagine what it’d be like if there were a fun way to learn, instead, where you start by playing real songs that you recognize on day one.

Guitar games offer this promise, but they’re not complete. In this article I’ll compare two popular games, and then tell you the secret to learn the guitar without the grind. I’ve tried dozens of apps, games, courses and tools to help learn the guitar. My favorite two educational games are YouSician (formerly known as Guitarbots) and Rocksmith (the 2014 edition, by Ubisoft).

Prefer your reviews in video format? Here’s a playlist of several reviews. You can skip ahead to get to a specific product:

Learn how to play anywhere. Yousician is meant to be used by the casual guitarist on-the-go. You’ll find catchy tunes that can be played on any guitar and on any device.

Made by a team out of Helsinki, Yousician is a big step up from their original Guitarbots product. The old software was a web app which aimed to be a “real life guitar hero.” You could play with any guitar and any computer, and the game would teach you the instrument.

Both GuitarBots and Yousician do their jobs well. On a technical level, the games detect the notes you play and score you for playing them clearly and at the right time. And since you can use literally any guitar to play (the game just uses a microphone), it is very realistic. That said, the songs provided in both are proprietary and therefore not as much fun to play as songs that you might already know.

There are two main new features introduced by Yousician:

The second item ends up being incredibly important. When you don’t know what you’re doing, you end up inventing any way you can to try to score highly in the game. You might end up bending your fingers in some weird ways and developing some really bad habits. Adding video courses to the game might not totally fix that problem, but it’s a clear attempt to mitigate it at least.

The big advantage to both GuitarBots and Yousician is that they are totally free to play. You can test them out today and see if they click for you.

Play like a true rock star. You’ll jump straight into hit rock songs on your PC or console. A truly fun game, you’ll have a blast using this.

The moment I started up Rocksmith 2014 by Ubisoft, I could tell that it had a very high production value. The graphics and general experience of the game make it clear that it was made by an established game design company. But how would it hold up as an educational tool? 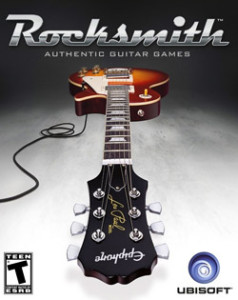 My first impression of the Rocksmith interface was that it felt awkward. For some reason, the vertically stacked guitar strings didn’t click with my brain. I found myself constantly fighting to remember which color/string was which. I got past that with time, though, and found myself really enjoying the game.

For the first time ever, I was truly engrossed by music. Hours slipped away as I worked on just one song. I was elated when I finally nailed a riff that had been giving me trouble. And it was magical to actually hear songs which I like come together underneath my fingertips.

As for the educational aspect: Rocksmith does a great job of making recommendations on what to do next. They’ve clearly invested a lot of thought into a system that detects what you need to work on, so you’re always challenged but not frustrated. The game seems to keep you in a constant state of flow, which can only be a good thing.

YouSician is free-to-try and can be played with an acoustic guitar. Rocksmith has songs you’ve actually heard of before and higher production value. However, if you try using YouSician for more than the free daily period, you’ll quickly find yourself paying for a subscription that costs more than Rocksmith does. With Rocksmith, there’s a one-time fee (unless you want to buy more songs, but the game comes with a lot of them already).

I’d also say that Rocksmith is more accurate at detecting right/wrong notes due to the proprietary cable they use. Instead of using a microphone, the cable connects directly from your guitar to a computer. It also has a wider breadth of techniques. In the 10 hours I played on YouSician, I learned more chords, but very little about hammer ons, pull offs, slides, bends, harmonics, etc. etc. etc. In the same amount of time with Rocksmith, I felt like I was actually learning about all of these elements and constantly being introduced to new ideas.

There’s one big problem with guitar games: they don’t transfer into real-life well. You might spend hours and hours playing the game, and then not remember a single song when you want to show your friends. This even happened to me! I was shocked how dependent upon the game I became. Games are fun, but you need to be able to play without them to impress your friends.

I want you to be able to show off your skills in any setting. Imagine sitting around a campfire, or in the room at your house and jamming along with friends. Maybe you’ll even join a band! I failed five times in ten years to learn the guitar, though. 75% of people quit in the first two months! You can do better.

Here’s what I suggest. Try out the course below, Guitar Without The Grind. It’s a free course I put together to help you learn guitar, available only for readers of this blog. If it doesn’t solve all your problems, or if you want more help, email me directly. It’s up to you. There’s an unlimited course guarantee, and a discount when you use the link below. Give it a shot today. Your fingers will thank you.